Remove the label from a bottle of clear plastic 2-liter and rinse thoroughly. Do not use soap and dry the inside. Add a small amount of very hot water. Screw the cap and shake.

Open the bottle and empty out of excess water, then light a match and drop it into the bottle: smoking is one of the key ingredients for the formation of clouds. Screw cap immediately and shake again for two or three times.

With both hands, squeeze the center of the bottle as hard as you can, then release both hands uniformly and very quickly: you are so simulating the third ingredient: a change in pressure.

After repeating for some time the operation of squeezing and releasing the bottle, you will see the cloud in the bottle. The vision will be clearer if you place the bottle in front of a dark background.

How do clouds form?

The clouds require three key ingredients to be formed into the atmosphere: water, dust particles and variations in temperature or pressure.

The molecules of water must in fact have a surface on which to collect. The air is constantly rich in water. When you look into the sky and you see a cloud, you are actually seeing humidity of the air.

Normally the vapor in the air can not be seen, unless it is collected and condensed forming a cloud. If the air was totally free of dust or other particles, clouds, however, could not make it, but luckily for us the nature provides to enter many of these particles in the air, particles that act as condensation nuclei, through volcanoes, oceans, fire, bacteria, etc …

So when temperature or pressure decreases, the air can contain minor amounts of water: the lower is the temperature, the greater the condensation, that is, the change of state of the water contained in the air from gas to liquid. 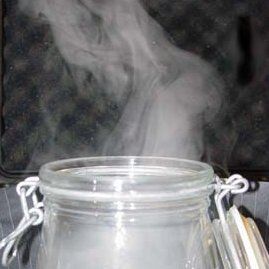 A glass jar with lid, hot water, ice, a sheet of black paper, a spray (the hair spray or air freshener are fine) or a match, a flashlight.

Make sure the glass vase is perfectly clean, then pour the hot water for about a centimeter and shake a little to get the heat along the walls of the jar. Warm the walls will prevent the formation of condensation immediately.

Take the lid and place it upside down on the jar, so that it can serve as a small bowl, and put on the ice. Done this, condensation may form on the walls of the jar, but not yet the cloud.

Now take the spray, lift the lid containing ice, and sprayed in small quantities in the jar, then very quickly replace the lid (instead of the spray, you can strike a match, do a little smoke inside the jar and then throw it in still burning).

The clouds begin to develop: to view them better, you can use the dark colored paper as background and illuminate the jar with a flashlight. If you lift the cover your cloud released from the jar and you can touch it.

When the hot, moist air is rising in the jar, it was cooled by ice contained in the lid, and when the water vapor has cooled has had a tendency to revert to liquid, but to condense has needed a surface.

The spray (or smoking match) has provided this surface, and the water vapor is condensed into tiny droplets so small they can float in the air .

In the jar our cloud will move a lot and probably will form vortex: these are due to the circulation of hot air rising and cold air falls.

Cover the bottom of the jar with water, then hang up the glove to jar with the fingers facing toward the inside of the jar itself. Insert your hand into the glove and quickly pull it out without getting loose from the edges. Nothing will happen.

Now remove the glove, dropping a lighted match in the jar, and replace the glove. The match will turn off creating smoke particles that act as condensation nuclei.

Pull out the glove again: we will now form inside the jar a fog will disappear whenever the glove will come back.

A large glass jar, a rubber sheet (for example made from a balloon), a rubber band, some gypsum powder (or talc), cold water.

Wash the jar and pour in about 25mm of water. Cover the jar with a piece of gum and put on it a book to hold it in place.

After 10-15 minutes, remove the book and the rubber from the jar, pulverize inside the chalk (or talc) and quickly replace the rubber. This time to fix it well with the rubber band.

Push down on the rubber with the fist: in this way the air is compressed and heated, so it will be able to hold more water vapor.

After about 15 seconds, quickly remove your fist so the air will cool, and will not be able to contain the same water vapor than before.