Science experiments for children – Edible candles. Our body uses stored chemical energy through the food we eat. Part of this energy is used for body functions and his work (jump, run, play, etc …) and part is transformed into heat. For the combustion need three things: initial energy (usually heat), oxygen and combustible.

Both in wax candles classic, both in “edible” candles oxygen is that present in the air, the initial energy is provided by the match or lighter, the combustible in the case of candle wax is the gas that is released from wax, in the case of those edible the olive oil or the oil contained in the almond.

A wax candle is made of two parts: the wick and the wax. The wick is made of an absorbent material, and when fire is lit, the heat of the flame melts the wax around it, the wick absorbs it, and this goes up along the wick by capillary action. When the liquid wax reaches the flame, evaporates and becomes a gas: this gas is the combustible that allows the candle to keep burning.

Also the edible candle is made of two parts: the almond (or the olive oil) and the potato (or apple, or the central filament of the tangerine). In the case of the almond, it is a fruit rich in proteins, fats and carbohydrates, but it is the high percentage of fat to make so that burn very long. Apple or potato or tangerine peel instead serve only to support, but do not provide combustible.

• at least 2 tangerines or clementines
• olive oil
• 1 sharp knife
• lighter or matches,
(a traditional candle to make with the kids comparisons between the two candles).

The hard part is obtaining the “wick” in the second half of tangerine, so they can serve much fruit … 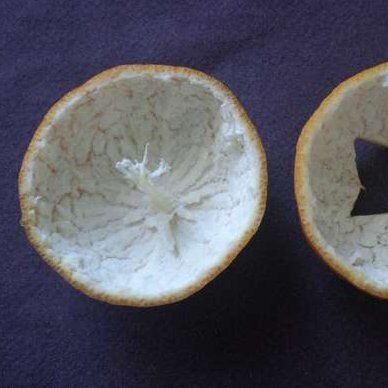 Incise tangerine peel along the circumference, and then remove the upper half of the peel (without the “wick”) taking care not to break it. we will now a half peel empty, and a half peel full of slices integers.

At the center of the slices is a beam of white strands: the “wick”, precisely. Remove the slices without breaking the white filaments in the center.

In the half without wick cut a decorative hole, for example star-shaped. 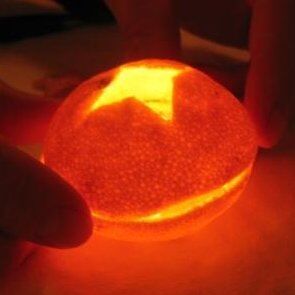 Fill half with the wick with olive oil, so that the wick protrudes from the oil level for about 5mm.

Set fire to the wick with matches or a lighter: The wick may contain moisture and still not be well soaked with oil, so we need to keep the flame for a few seconds after it starts burning. When this is triggered, place the second half of tangerine on our candle.

Beautiful and fragrant Christmas and scientific activities (or even for St. Martin).


What do you need?

A potato cropped shaped candle (raw or boiled if you really want to eat it, for play wizards)
flaked almonds
lighter or matches
(a traditional candle to make with the kids comparisons between the two candles).

Place the candle shaped
potato on a plate. Insert in the upper part a flake of almond, as wick. Set fire to the almond. Observe with the children what part of the candle is burning. Blow out the candle. If you want, eat it …


What do you need?

An apple
a knife
an almond
matches or lighter
(a traditional candle to make with the kids comparisons between the two candles).

Cut off the top and bottom of the apple Choose a nice sliver of almond, or peeling an almond and crop (long and narrow). Put the almonds in the apple. Set fire to the almond. Blow out the candle. If you want, eat it …

We can also extract from the apple a cylinder-shaped candle and then apply the almond, and it seems a great idea for a birthday apple pie: 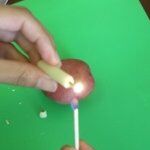