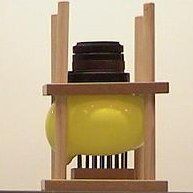 You will need a piece of wood for the bottom, where you can attach two rods upright on either side, to enter the upper tablet   (provided with two holes corresponding to the rods of the tablet bottom).

On a smaller tablet planted a hundred of nails, in such a way that they protrude from the opposite side to form your bed. If you want you can also use a table of polystyrene for simplify the operation.

If you want make the comparison predispose other tablets of the same size, but with a lower number of nails, and one with a single nail.

Prepared also some weights (which may also be packets of sugar or flour or stones previously weighed and marked).

Proceed with the experiment.

If you follow the gradually from a nail in a growing number of nails, the experiment will be much more interesting for the children, who will see the first burst a number of balloons, and then … surprise!